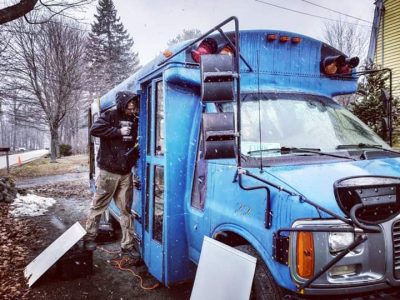 The vagabond lifestyle has encapsulated many to take up their dream of building out a vehicle to live in and travel the country. For some, its a sense of freedom, for others it’s a testament to their hard work and determination. Whatever your goal is, having the right tools and know-how will take you wherever you need to go. I have built multiple school buses and converted them into livable homes as well as sprinter vans and other obscure vehicles.

It can be a difficult task to figure out what tools you may need. My first bus was a smaller size GMC from 2005. It had a wheelchair lift in the back and all the seats still in it. My first task was to rip out every seat. In order to do this, we purchased angle grinders. From there we ground each and every bolt out. Then we would place ourselves between the seat in front and the seat we needed to remove and gave it a big “kick”, This would snap the chair out of its place and we would throw them outside. The second part we had to angle grind was the wheelchair lift. From there, it was stripping the flooring out.

In order to strip out the 4 layers of flooring on our first bus, we had to make some serious leverage. I had a 4-foot crowbar as well as a standard one. The standard one came in handy when we had to pull the flooring around the wheel wells. The larger crow-bar was for the big spaces in between. The spaces we couldn’t lift using our muscle, we used a circular saw then ripped out whatever was left.

DRILLS: Have A Backup

Out of all the tools I had purchased, the drills were the most expensive. I purchased two for my buddy and myself. We each had smaller battery packs. They would die pretty quickly. So I purchased larger batteries for them, but they took too long to charge, then I finally caved and purchased a supercharging station for the batteries. At this point, I was pretty invested in drills. It all came in handy when we had to strip out the ceiling panels to put in the insulated spray-foam. There were thousands of little screws that had to come out one-by-one. We were able to take them out in no-time (because there were two of us). Once we applied the spray foam, it was back up with the panels. Putting the thousands of screws that we had taken out back into place.

Wherever you go, whether you’re driving across the country or chilling from local place to local place, you’ll want to keep a handy ratchet set along with you. There have been multiple times that I have run into issues with my bus or van where a simply ratchet set with a standard 5/8 has gotten me out of massive trouble. Ratchet sets have gotten me out of being stuck in the winter, on the side of the road, and literally anywhere else that your bus can break down. They were my lifesaver tools.

Where You Go, Have The Right Tools

The right tools will help take you anywhere. Yes, they are an investment, but when you’re building or converting a school bus or van, they are an essential investment for the conversion process. There are multiple ways and factors as to why you need at least what is listed here. Everything else outside of that can come with time, but don’t go on your adventure without having the proper necessities to get you where you need to go. Whether you want to stick around your neighborhood or travel all the way to Los Angeles, you’ll have everything you need to be a vagabond!