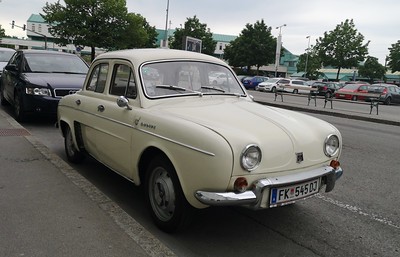 Renault Dauphine is a car that lives in the hearts and minds of many car enthusiasts. Unfortunately, it isn’t remembered for anything good.

The design specifications were developed by Pierre Lefaucheux. The idea was to build a vehicle that could meet the increasing standard of living for post-war consumers.

Testing was done throughout all parts of Europe. Dry weather and dusty conditions in Madrid, engine testing in Beyonne, cold testing in Norway, suspension testing in Sicily, and weather seal testing in then Yugoslavia. In total, approximately 1,250,000 miles were covered in testing for the Dauphine.

The Dauphine was one of the first European cars to take notice of new color schemes. In a 1951 survey, performed by Renault, showed that women prefer the color of the vehicle over the make or model type. Paule Marrot had lent her expertise on the subject and was hired by Renault to develop new color schemes for their vehicles. Her ideas moved away from the drab two-toned color scheme of post-war Paris and set a precedent for upbeat and colorful vehicles from then on out.

Sales for the Dauphine were monumental. Within a 10 year period, 2,150,738 Dauphines were produced. The car was one of the most successful sellers of the time and received monumental praise from many car reviewers of the time. One reviewer praised the engine capabilities and maneuverability as “Nimble, it reaches 50 mph in 19 seconds. It darts through traffic like a beagle after a cottontail.”

After the Dauphine hit the US market, issues quickly started to sprout. It was viewed as sluggish and instant rusting was a major issue facing the French car. Reports came in that after one year in New England, the car’s front end would experience so much rust that it proved disastrous for many of its buyers. The results were so bad that 2 full shipments of Dauphines were sent back from New York due to eventual unmoving sales.

A Legacy In The Dust

The unfortunate side of this car is that is commonly ranked as one of the worst cars ever built and sold. The overall importance sets it as a staple for how automotive companies shouldn’t behave. This comes as disappointing because of the Dauphine’s successful sales records.