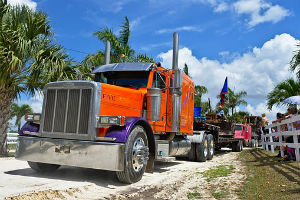 Despite the much-discussed shortage of truckers, the International Brotherhood of Teamsters has joined the outcry from most early commenters in flat rejecting the idea of reducing the restriction for an interstate driver’s license from 21 to 18.

Currently, 75 percent of the exactly 180 comments filed thus far loudly disagree with the initiative. Moreover, the reaction has been swift to the proposal issued days ago by the Federal Motor Carrier Safety Administration. So far, most of the disapproval is born out of safety concerns.

“The decision by the FMCSA to propose a pilot program that would lower the commercial driver’s license restriction from 21 to 18 is of grave concern to those who use the roadways as their workplace everyday,” Teamsters General President Jim Hoffa said in a released statement.

Hoffa alleges that restricting a similar pilot program with veterans that have a military driving background is needed. Hoffa claims this would balance out what he thinks are the immense risks of having teenagers operating tractor trailers.

For Hoffa, allowing this pilot program feels dismissive and hasty.

The FMCSA and the ATA maintain that the shortage of drivers coupled with the fact that younger drivers are currently permitted to drive commercially within states is reason enough to explore a program that involves driving on the interstate.

Teamsters disagree with this assessment arguing that the driver shortage really only affects a portion of the trucking industry – the large-carrier truckload sector. It’s that particular group that comprises a chunk of the ATA’s membership.

Ultimately, Teamsters want less emphasis on getting new drivers and more on improving pay and working conditions. They insist this a far greater issue.

What do you all think? Should we go down the road of younger interstate truck drivers?