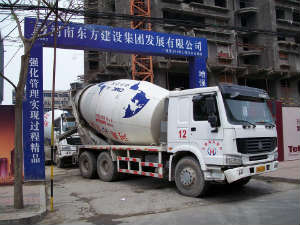 This crash occurred on Lehigh Valley roadway. Interestingly, the is a hotspot in Pennsylvania for traffic accidents. It is along Route 33 near Bethlehem, Pennsylvania.

When arriving at the scene, shocked police found the aftermath of the incident. A cement truck, which seemed unharmed, was next to a small SUV smothered by wet cement. The two vehicles had collided. Sadly, after colliding with the large cement truck, the mixer malfunctioned and dumped cement on the SUV.

Thankfully, no one was injured in the accident. Both firefighters and policeman affirmed that the roadway is well-known for incidents. Although, the likelihood of this accident seems almost comical. A group of fire-fighters posted the incident on Facebook. Interestingly, the comments were more about the humor in the accident rather than the accident itself.

It took multiple cleaning crews about an hour to remove the wet cement and clear the area. Car haulers had to move both vehicles. Fortunately, there are no permanent damages to the roadway because of the cement. The road received no permanent damage from the accident. Also, no citizens reported any further accidents on Lehigh Valley since the cement spill.

Accidents involving cement trucks and other heavy haulers can be very serious. Obviously, the hardening cement complicates things even further, as it will become difficult to clean things up very quickly. Not to mention how these heavy vehicles can cause massive damage to other vehicles and put people’s lives in danger. However, it seems as though in this situation, the worst pain for the other driver is mere embarrassment.