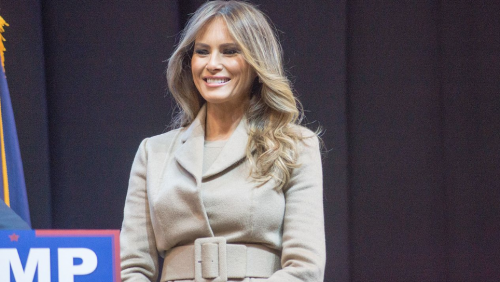 PHILADELPHIA, Pennsylvania – From a 10:02 AM news release, an information was reported about Melania Trump’s plane being turned around not long after the takeoff due to some “burning smell” issue on board.

There was a mechanical problem which caused smoke, and it became to smell stronger when the plane started to move. Reporters from the board said that they were covering their faces with wet towels to not to smell the burning odor.

Trump took a break at Joint Base Andrew after which was pronounced “fine” and ready to visit Philadelphia today.

Two weeks have passed after her husband was visiting Philadelphia, and now she is making a visit with her campaign called “Be Best” today.

In her schedule, she is expected to visit Thomas Jefferson University Hospital to meet with families of children who were affected opioid exposure in the womb. Alex Azar, US health and human services secretary, will join her later during the day.

Melania Trump will speak at health department making a conference to discuss a system that tracks newborns and infants’ conditions.

Be Best campaign started its operations in May. The campaign was described as a motivational way of promoting the wellness of children. The campaign also covers topics such as online bullying and the impact of opioids on youth.

During the last trip, Trump visited Malawi, Kenya, Ghana, and Egypt as a way of promoting the newly created campaign.

If you are working or traveling in Philadelphia today, be aware of center traffic as the first lady will be mostly in Center City during the day.

A Gas Station Worker Trapped in a Fire in Bensalem