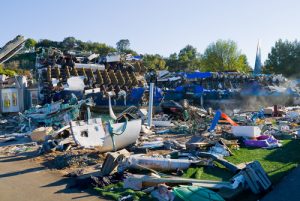 PHILADELPHIA, Pennsylvania — Local News has confirmed one person has been taken to the hospital after a damaged Southwest Airlines jet made an emergency landing at Philadelphia International Airport.

The injured person was taken to Penn Presbyterian Medical Center. There was no immediate word on that person’s condition.

Local News is told Southwest Flight 1380 left LaGuardia Airport in New York City and was en route for Dallas when something went wrong with the plane and it was diverted to Philadelphia International.

The Boeing 737 jet was carrying 143 passengers and five crew members.

Tracking data from FlightAware.com shows the flight was heading west over New York’s southern tier when it abruptly turned toward Philadelphia.

There was no immediate, official word what forced the landing, which was described as “safe.”

The airport released the following statement shortly after 12 p.m.:

“Southwest Airlines flight 1380, which departed LaGuardia for Dallas Love Field (DAL), diverted to PHL because of an operational event. The plane landed safely. No slides were deployed. At this time, passengers are coming down a mobile stairway and are being bussed to the terminal. PHL Flights continue to arrive and depart but passengers should expect delays.”

“We are aware that Southwest flight #1380 from New York La Guardia (LGA) to Dallas Love Field (DAL) has diverted to Philadelphia International Airport (PHL). We are in the process of transporting Customers and Crew into the terminal. The aircraft, a Boeing 737-700, has 143 Customers and five Crew members onboard. We are in the process of gathering more information. Safety is always our top priority at Southwest Airlines, and we are working diligently to support our Customers and Crews at this time.”

Numerous firefighting vehicles were seen surrounding the jet on the tarmac.

A large amount of fluid, possibly jet fuel, was seen under and trailing behind the left side of the plane.

Firefighters were seen helping passengers from the plane.