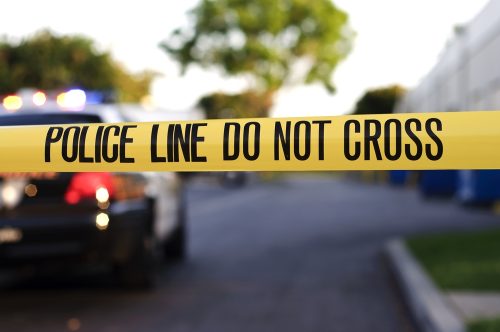 Lower Macungie Township, Pennsylvania — A Pennsylvania state trooper shot and killed a theft suspect who allegedly fired at him first outside a Lehigh Valley Walmart late Wednesday, with the entire incident captured on store video.

The trooper killed the suspect while returning fire in the parking lot of the store along Mill Creek Road in Lower Macungie Township after responding to a report of a masked man, state police said.

A witness said he saw a law enforcement officer chasing the man outside the store when he heard the officer yelling for the man to stop. He then heard a series of shots.

A Glock handgun allegedly belonging to the suspect was recovered in his lap.

The store, open 24 hours a day, was evacuated as police began their investigation late Wednesday.

The suspect was wearing a life-like mask and wig inside the store, going through aisles for about 15 minutes, filling up his cart, police said. A loss prevention officer noticed the man and called the police.

The suspect’s description matched that of a theft in early March at a Schuylkill County Walmart, police said.

Per normal policy, the trooper was placed on administrative duty while the investigation takes place, D’Ambrosio said.

Walmart said they are working with police and had no further comment.

State Police from Bucks County and the Lehigh Valley District Attorney’s Office are investigating the incident.

Vaccine Deadlines For School District Calm Some Parents, Worry Others

Is There a Social Discrimination in Philadelphia? Protesters Speak

A Gas Station Worker Trapped in a Fire in Bensalem