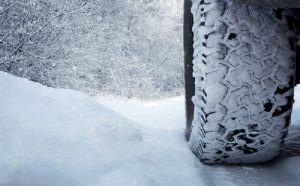 A record-breaking holiday storm has covered the lakefront city of Erie, Pennsylvania, in more than five feet of snow this week. Streets and driveways are buried in mountains of powder and ice, forcing residents to abandon their disabled cars and breaking several snowfall records.

The National Weather Service said the storm had dumped about 60.5 inches of snow on the area from about 7 p.m. Sunday, when it began, to about 8 p.m. on Tuesday. About 63 inches has fallen since Saturday, the weather service said — and more is on its way to come yet.

Tom Niziol, a winter weather expert at The Weather Channel, said that the total could approach 70 inches by Wednesday night before the storm tapers off. The snow is part of what he called a “lake-effect snowstorm.” Such storms occur when very cold air comes over the relatively warm waters of the Great Lakes, he said. Heat and moisture then rise into the cold air to produce snow; the direction of the wind determines where the snow falls.

The Pennsylvania Department of Transportation has placed a travel restriction for certain commercial vehicles due to a massive snowstorm that blanketed Erie, Pennsylvania, with more than 54 inches of snow.

On December 26th, the Pennsylvania Department of Transportation stated the following in a press release:

Due to the severity of the winter storm, PennDOT is restricting commercial vehicle travel on Interstate 86 and a portion of Interstate 90 in Erie County.

The restriction is in place for Interstate 86 and Interstate 90 from the New York state line to the Interstate 79 intersection. Lightly-loaded or empty semi-trucks are included in the limitation, recreational, vehicles double trailers, non-commercial vehicles towing trailers, and motorcycles. 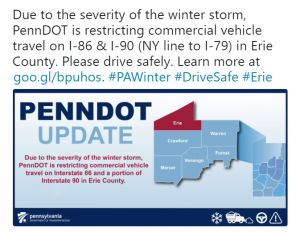 The state’s Department of Transportation is advising all other vehicles not included in the restriction to only travel if necessary, and exercise extreme caution if travel is a must.

Also, PennDOT added that “drivers should never attempt to pass a truck while it is plowing or spreading winter materials.”

These Celebrities Started As Truckers